In Liber VII of the Metamorphoses, Ovid retells the fable of the creation of the Myrmidon people. This section in the Metamorphoses follows the King of Crete, Minos, who is seeking revenge for the death of his son, Androgeus. Androgeus was murdered in Athens, and, for that, Minos is searching for allies to wage a war against Athens.

Ovid, while recounting the story of Minos’s pursuit for allies, also recounts the story of a great plague decimating the population of Aegina. The Prince of Aegina, Aeacus, survives this plague. Distressed by the loss of his people, Aeacus seeks his said-to-be father, Jupiter, for help. As Aeacus observes a tree, sacred to Jupiter, covered with many ants, he demands Jupiter to give him the same number of citizens as the number of ants on the tree. As Aeacus dozes off, he sees the tree shake off the ants vigorously. He observes the ants, now on the ground, turn into humans––the Myrmidons.

The tale then returns to Minos. After much defeat in securing allies, Minos turns toward Aegina for help. Not only is Minos turned down by Aeacus, but by the time that Minos arrives in Aegina, so does Cephalus, the ambassador of Athens. Aeacus recounts to both Minos and Cephalus the tragic plague that hit the people of Aegina, as well as the godly repopulation that he witnessed.

This website will specifically look at the scene in which Aeacus demands citizens from his father as well as the transformation of the ants into the Myrmidons. 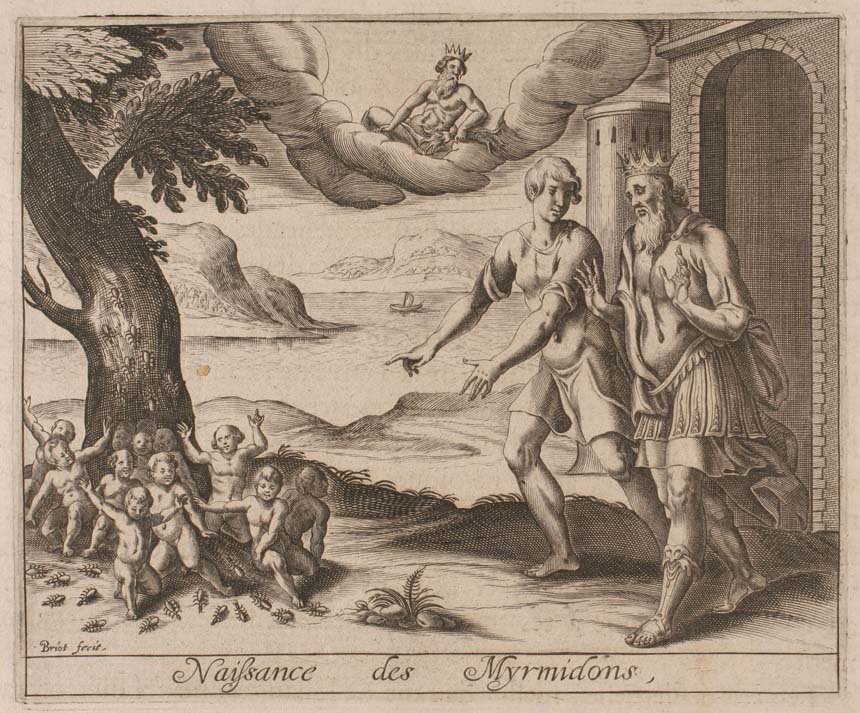 "When Aegina Is Depopulated by a Plague King Aescus Asks Zeus to Turn the Ants into People." 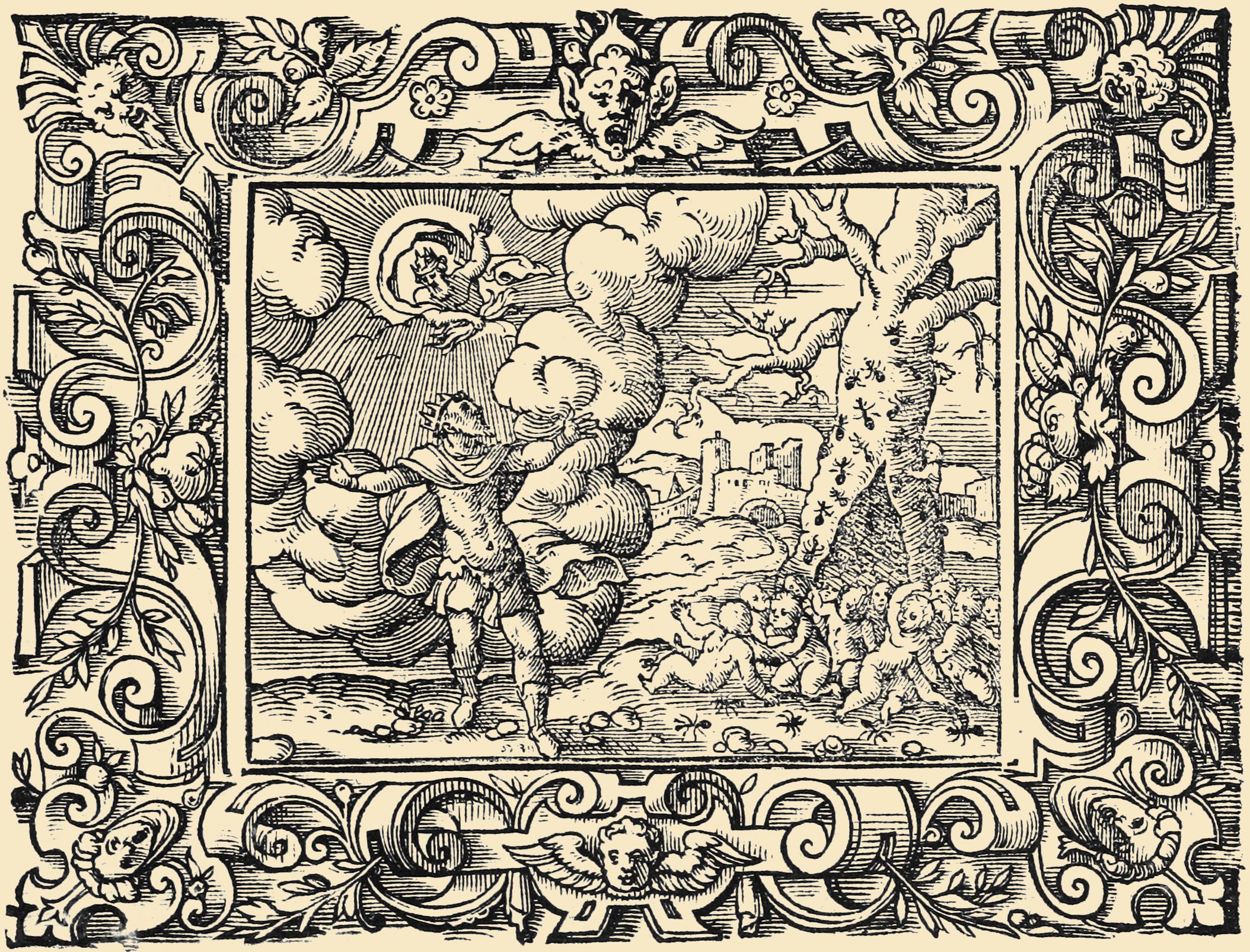 Take a look at the literal translation of the metamorphosis of the ants into people, as well as see notes and vocabulary and the original latin text with macrons. 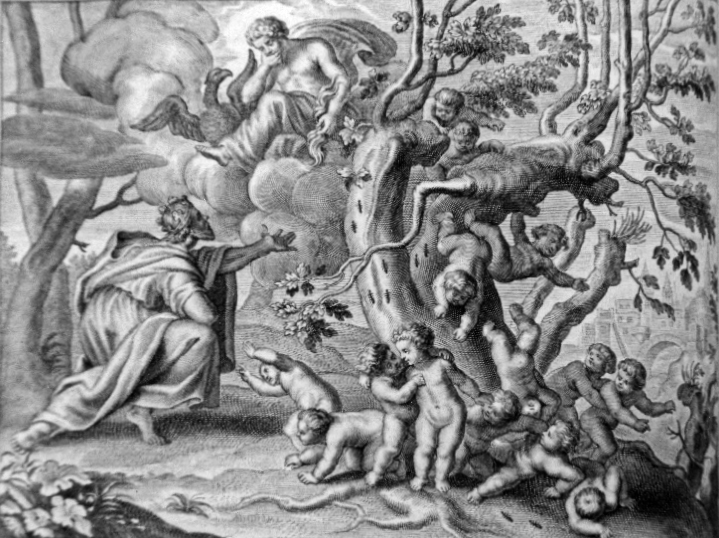 A look at the way that Ovid depicts the main character, Aeacus, and the temperatement with which Aeacus talks to the gods. Aeacus's actions diverge from the Roman societal norm.


In Roman society, it is societal norm to talk to the gods politely and to not demand. In Roman literature, authors reflect this by using the subjunctive mood when a character talks to the gods. The mood shows politeness because the verb holds a connotation of uncertainty by the use of “may” or “might” and removes the connotation of a demand. Additionally, characters in Roman literature are often depicted as treating a single god as a plural entity. Ovid is no exception; in Ovid’s Metamorphoses, Liber VIII, the story of Baucis and Philemon is an example of these methods in use, specifically when either of these two main characters are speaking to the gods. For example, Baucis and Philemon, when asking the gods for a favor, use the subjunctive hortatory, and never the imperative. In Liber VII, Ovid diverges from these methods to show contrast when depicting Aeacus. Ovid depicts Aeacus in the opposite manner of Baucis and Philemon: Aeacus uses the imperative to demand what he desires from the gods and treats himself as a plural being. Aeacus, throughout the fable of the creation of the Myrmidon people, shows a lack of respect when talking to the gods.

Aeacus’s lack of respect can specifically be seen when he is demanding his said-to-be father, Jupiter, to repopulate Aegina. In line 628, Aeacus says, “tū mihi dā”; “dā” is the 2nd person singular present imperative, which makes this line very direct and commanding: “You give to me.” Ovid specifically adds emphasis on the “you” by adding “tū,” because the second person is already inclusive to “dā.” Furthermore, Aeacus tries to instill guilt into Jupiter by saying, “nec tē, māgne pater, nostrī pudet esse parentem.” The literal translation of this line is “and if it does not shame you, great father, to be the father of us.” This, at first glance, appears to be polite because Aeacus is giving Jupiter the attribute of greatness; however, looking at the word placement and word choice, this response is rather rude. Ovid places “esse parentem” (“to be father”) last in the line, placing emphasis on that Jupiter is a bad father because of the shame Jupiter holds for being Aeacus’s father. Additionally, in this line, one can see the lack of politeness by Aeacus referring to himself in the plural with “nostrī” and Jupiter in the singular with “tē.” The verb number in this line should have been the other way around. The rudeness in Aeacus’s speech is obvious and evident throughout the entirety of the tale.

Take this test to prove your knowledge!

Thoughtfully built and coded by Matthew Stallone. All code can be found at: github.com/mstallone/Ovid-Project